In order to impress viewers, modern sculptors try to create something really unusual. Their works often move, light up, or even violate the laws of physics. However, there are monuments that look pretty simple, but the amazing things about them are in the stories of these monuments.

Bright Side presents you with several sculptures that can only be truly appreciated once you know about the events behind them.

Woman with a bag 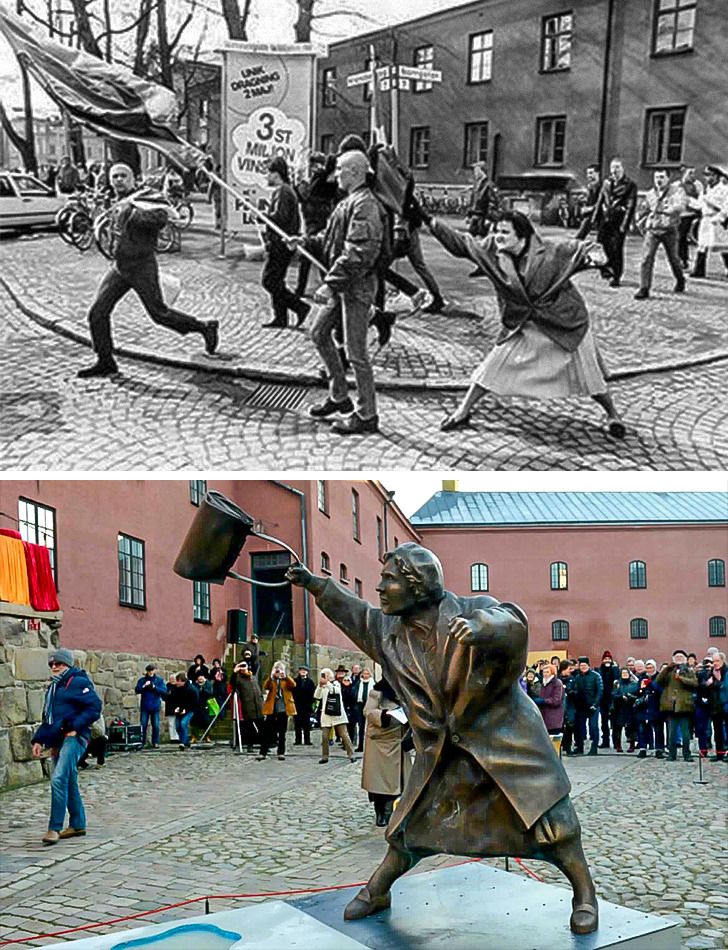 This monument was set up in Växjö, in memory of Danuta Danielsson, a Swedish woman who showed true civil bravery. It happened in 1985 during the demonstration of the Nordic Reich Party, a group of aggressive people who support Nazi ideas.

While other people tried not to look at this demonstration and tried to steer clear of it, Danuta hit one of the men with her handbag on his head. This inspired other people and everyone started to gather to make the neo-Nazis leave. In the end, the neo-Nazis had to hide in a bathroom at a train station and wait for the police.

After that, a lot of cards and statues with Danuta and her handbag were made and sold in the city. She is now associated with a person who is not willing to just watch when something bad and unfair is happening.

Shark on the roof 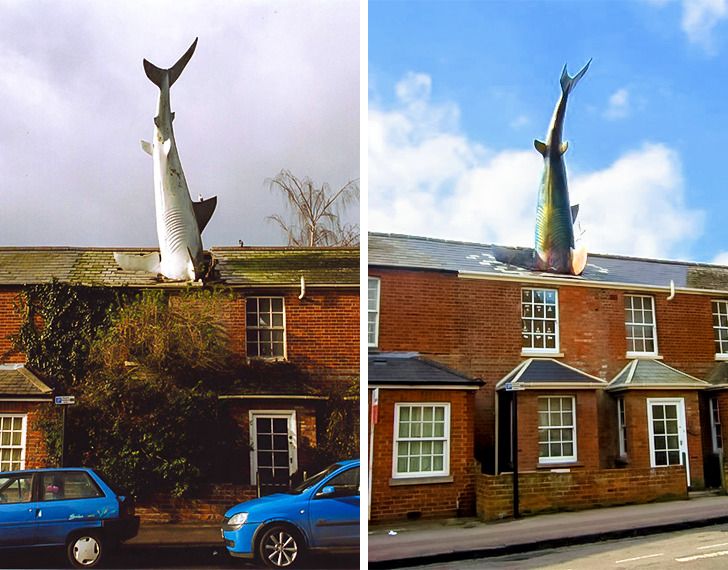 You can see this sculpture in Oxford, England. At first sight, it looks as if a huge fish just hit the roof of one of the houses.

Despite the fact that it looks funny, it has a very sad subtext. The shark symbolizes a bomb that was set there on the 41st anniversary of the Nagasaki attack. 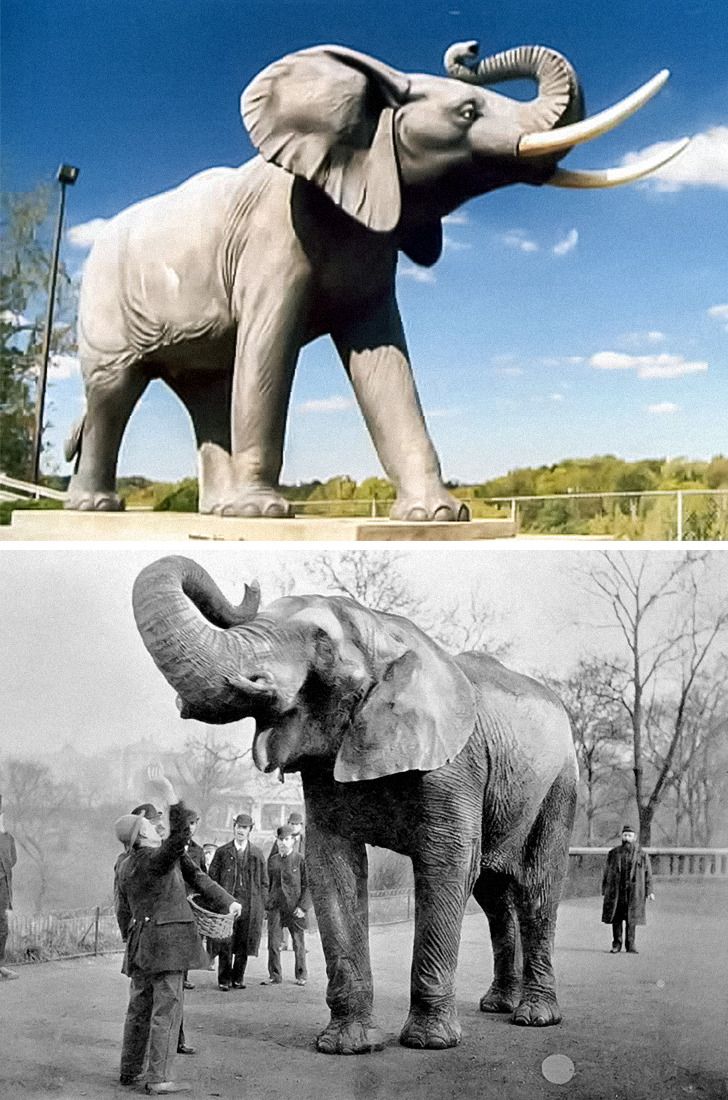 This statue is located in St. Thomas, Canada. It shows a savannah elephant and it is about 13 ft tall. But it’s not here as just a fun thing to see.

This statue is here in the memory of the most famous circus elephant, Jumbo, who died in this city when he was killed by a train on the railways.

There is a similar exhibit at Tufts University in America. It’s not a sculpture, but a stuffed elephant made soon after he died. 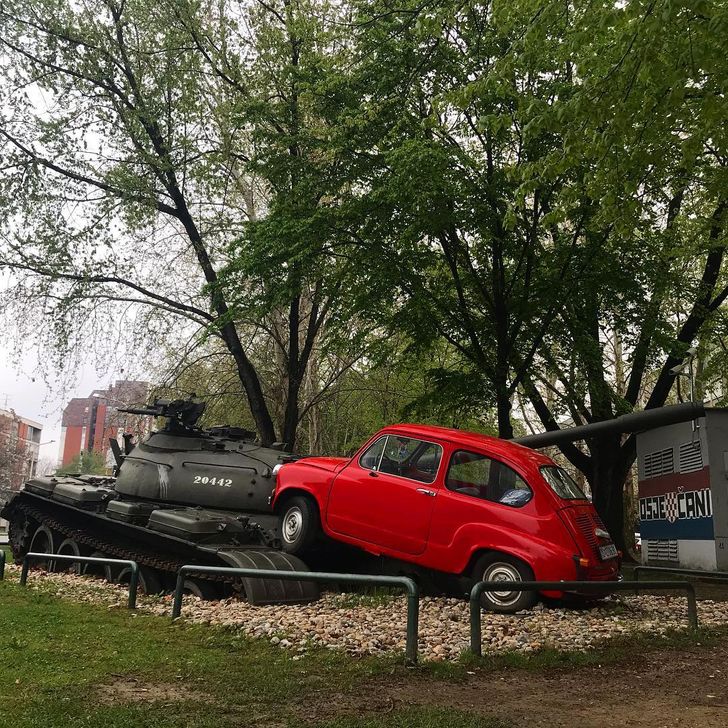 This monument is located in Osijek, Croatia. The small red Fićo (Fiat) car is literally pushing a massive tank into the ground with its wheels. This sculpture was made in the memory of a true story.

The real “brave Fićo” became famous on June 27, 1991, when the Yugoslavian military troops entered the city. One of the citizens parked his small red Fiat in the way of the tanks in order to demonstrate his disobedience to the enemy. After that, the man just left his car and walked away.

The car was destroyed but the incident was recorded on video which was later shown on TV. As a result, the car became famous and a symbol of the Osijek citizen’s spirit. By the way, many people from this city died.

This monument located in Enterprise, Alabama, looks pretty strange, it depicts a goddess of agriculture, grain crops, fertility, and motherly relationships. Ceres, the Roman goddess of agriculture, is holding a boll weevil, a pest, above her head. However, just like all the other statues in this article, this one has its own interesting story.

It began in 1915 when the population of boll weevils in Alabama suddenly increased. For 3 years, the bugs actively destroyed the cotton fields and the local farmers whose income was dependent on selling cotton were on the verge of bankruptcy. They couldn’t figure out how to eradicate these pests.

But then, one of the farmers decided to plant peanuts in his fields, instead of cotton. The product turned out to actually be in demand and the farmer became rich, becoming a positive example for all the others. Soon many of the farmers started growing peanuts and many of them became rich.

The monument was set up in 1919 as a reminder that sometimes a catastrophe is not the end, but a chance to start a new and better life.

Man in the bathroom

In Grand Junction, Colorado, US, there is an unusual monument: it shows a man who is writing something and taking a bath with a toy duck. Onlookers rarely miss the chance to take a photo with the sculpture, but it was not set there just for fun.

The artist was trying to show Dalton Trumbo, the scriptwriter of movies like Roman Holiday, Spartacus, and A Guy Named Joe. In 1947, Trumbo was added to Hollywood blacklist because he was close to the US Communist Party. When Dalton refused to give Congress the names of other party members, he was sentenced to 11 months in prison.

This story scared some of the members of the Communist Party and they gave Congress the names it needed. These people were judged by society but Trumbo spoke for them, calling them victims just like he was.

There is a movie called Trumbo about the talented scriptwriter and the main role was played by Bryan Cranston. And yes, Dalton loved to work in the bathroom. This is why the sculpture looks like this. 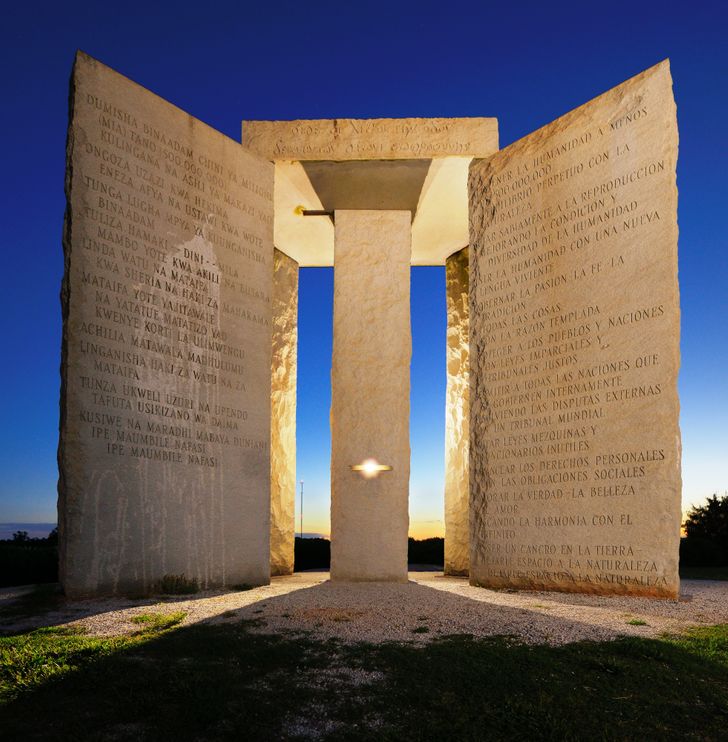 The monument that consists of 6 granite slabs and is located in Elbert County, Georgia, in the US. There are inscriptions on the slabs in 8 modern and 4 ancient languages. The texts give instructions on how to restore society after the end of the world.

It is interesting that nobody knows the person who initiated the placement of this monument. The slabs were made by Elberton Granite Finishing Company. According to the company representatives, they set the price 8 times higher than normal, but the mysterious customer introduced himself as Robert C. and paid the price without haggling. Who this Robert C. is, nobody knows. 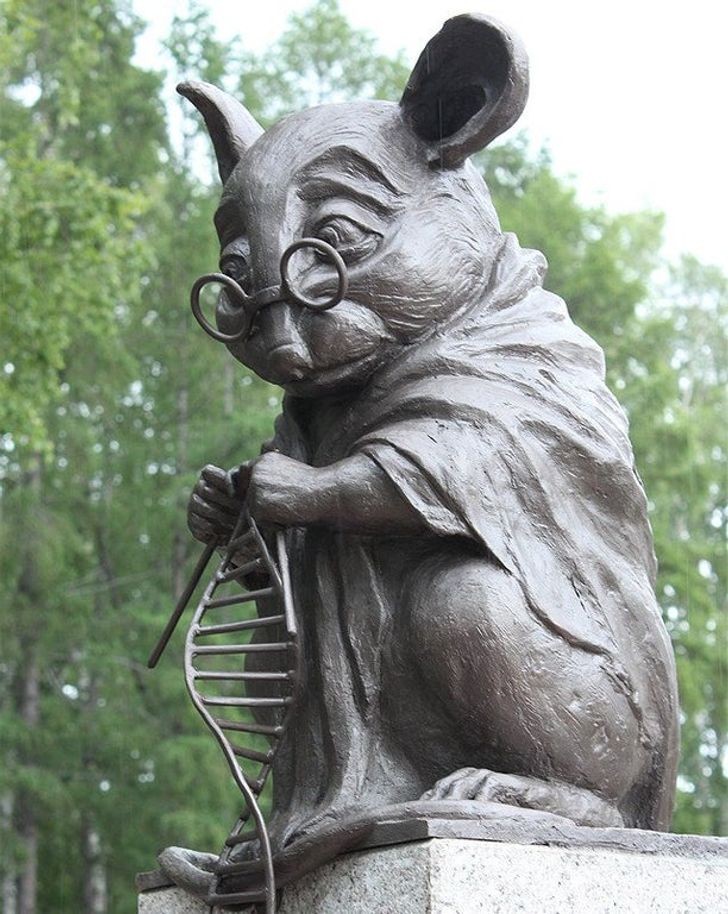 This monument was set in Russia on the Novosibirsk University campus. It was opened on July 1, 2013.

The creation of this sculpture was for scientists to express their gratitude to the lab rats that give humanity a chance to study genes and the physical and molecular mechanisms of diseases, and to develop medications.

Artists design bandanas to boost election turnout in the US

5,000-year-old stone tablet which was made in Iraq and contains a beer recipe as well as the ‘first ever signature’ has sold for £175,000