To hear She Loves You bursting out of a radio in the last week of August 1963 was to recognise a shout of triumph. Everything the Beatles had promised through the first half of the year found its focus in their fourth single, an explosion of exuberance that forced the world, not just their teenage fans, to acknowledge their existence.

The double-jolt of Ringo Starr’s drums kicked off a record that, unusually, began with the song’s chorus: “She loves you, yeah, yeah, yeah.” Straight away that Americanised triple “yeah” (Paul McCartney’s father, the first to hear the completed song, asked if they could change it to “yes, yes, yes”) offered a fanfare for a culture on the brink of irreversible change. It marked the moment when the Beatles moved from being just another pop sensation to a national obsession: misquoted by prime ministers, cursed by barbers, viewed by schoolteachers as the vanguard of a revolution that must be stopped. And before long, almost universally adored.

Sharp ears had detected its pre-echo in Love Me Do, their first single, released the previous October: the unfamiliar northern rawness of the two matched lead voices and a plaintive bluesy harmonica over a slouching rhythm. It had scraped into the top 20. Three months later, in January 1963, the mounting interest in this group from Liverpool was answered by the urgency of the follow-up. On Please Please Me, the harmony vocals were more adventurous, the lead guitar and drums filled the gaps in the tune with syncopated phrases and the harmonica was imaginatively embedded rather than highlighted in the overall sound. With young listeners now recognising the Mersey sound when they heard it, the record went to No 1 in the NME and Melody Maker charts. From Me to You arrived in April, a bit of a disappointment in terms of adventurousness – it was a song with a sweet tooth – but catchy and driving enough to foment their increasing popularity and stay at No 1 for seven weeks.

It was still at the top when Lennon and McCartney started writing She Loves You in their hotel room after a concert at the Majestic theatre in Newcastle-upon-Tyne on 8 June, the penultimate night of a 21-date UK tour in which they shared the bill with Roy Orbison and their fellow Liverpudlians Gerry and the Pacemakers. (Orbison had been the original headline act, but such was the response to the Beatles that they were promoted to share top billing and close the show.) The following day, before setting off for the tour finale in Blackburn, they finished it at McCartney’s family home, 20 Forthlin Road in Allerton, south Liverpool, a terraced red-brick council house owned by the National Trust since 1995 (and later viewed by a YouTube audience of 52m in the episode of Carpool Karaoke featuring McCartney).

This one had a new confidence, beginning with the bold move of getting away from a first-person narrative and starting with the chorus before leading into the memorable opening lines of the first verse: “You think you’ve lost your love / Well I saw her yesterday / It’s you she’s thinking of / And she told me what to say” Apart from the indelible yeah-yeah-yeah (which gave its name to France’s yé-yé youth culture), the principle attraction was the moment at which the singers sang a falsetto “Oooooh!” and shook their mop tops, triggering screams of ecstasy that would make their way around the globe. 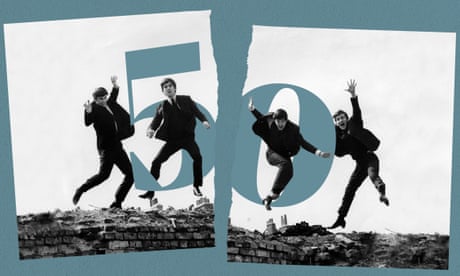 ‘I was shattered’ – Paul Weller, Booker T and more on the day the Beatles split

The playing also showed an increased sureness, particularly in George Harrison’s lead guitar and the imaginative drum fills that were all the evidence required to demolish the opinion of anyone who ever dismissed Starr as a hod-carrier. They all benefited from the way the song was recorded at Abbey Road. Producer George Martin and studio engineer Geoff Emerick had found a way of surrounding a four-piece beat group with a corona of reverb that matched the sound of American studios. They pushed the instruments higher in the mix, challenging the voices and creating a new intensity. The instruments were no longer the “rhythm accompaniment” of earlier forms of British popular music. She Loves You presented an integrated whole, a sound of collective creativity that demolished the supremacy of solo artists, setting a trend that would dominate pop music for a generation.

Four years later, in the summer of 67, the song would provide one of the most poignant moments in the group’s entire output when McCartney’s voice materialised through the random collage of sound on the long fade-out of All You Need Is Love, singing that simple phrase: “She loves you, yeah, yeah, yeah.” Already they were looking back, with a hint of wistfulness, at the time when history was being made and no one could imagine what lay ahead.